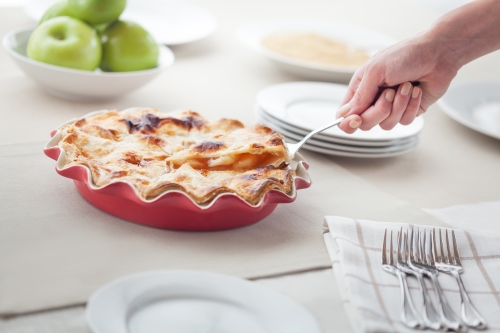 Pie is an inviting, homemade and delicious dessert that evokes pleasant memories of home. There is no doubt that Americans love pie, and whether it is sweet or savory, the pie plate is an essential part of the recipe.

With that in mind, we turn to Rose Levy Beranbaum, award winning author of The Baking Bible and The Pie and Pastry Bible, to learn a bit more about how the idea for the Rose’s Perfect Pie Plate came about, and why it is the perfect pie plate for baking delicious pies throughout the year.

HIC: Can you please tell the story of how the idea of a pie plate come about, including what you saw was needed in a pie plate that wasn’t available.

Rose Levy Beranbaum: When teaching students how to make pie crust, the one thing most were intimidated by was making an attractive border. When using a popular pie plate that had a fluted edge, I tried just pressing the dough into the edge, but found that it was so shallow it didn’t hold the impression. Because I found that this pie plate didn’t hold its impression, I reached out to the company and suggested that they make a deeper fluted edge, and also a standard 4-cup pie plate rather than the deep-dish model, but they were not interested in the idea at that time.

From there, I made a prototype. My cousin, Elizabeth Granatelli, who is an artist, brought me some modeling clay so that I could create the exact shape I wanted. She then created the drawings so that it could be reproduced in ceramic. 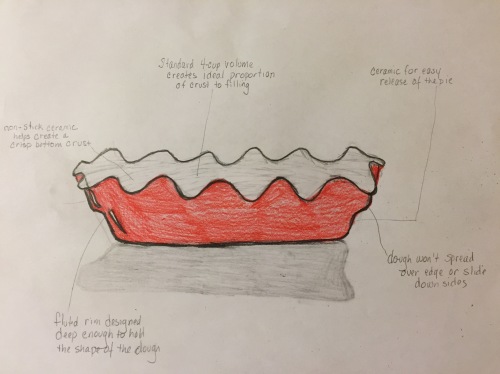 HIC: What is it about the pie plate that sets it apart from others?

Rose: I designed the fluted rim to form a small flat “shelf” with slightly curved edge so that it would be fluted deeply enough to hold the shape of the dough, but also so that it would neither spread over the edge during baking, nor slide down at the sides. (I find that the dough slides down the sides of the new version of the ‘other’ fluted pie plate, because the fluted edge is straight up and down.)

Another benefit of the fluted rim on my pie plate is that you get extra pie crust to eat — it is the crispest part of the pie crust, which is everyone’s favorite.

Further, the ceramic material is non-stick so that it is easy to remove slices of pie. And it helps to create a crisp bottom crust and even baking throughout. (Note that all pies benefit from setting a foil ring on top to protect the edges from over-baking. I make my own so that it fits the extra wide rim perfectly.)

HIC: Can you tell us a bit about the key features of the pie plate?

Rose: Ceramic is ideal because it releases the pie crust easily and also because it is so beautiful it can be used as a serving dish as well as a pie plate.

The depth of the pie plate and the standard 4-cup volume create the ideal proportion of crust to filling. It also makes it much easier to serve a perfect slice of pie, as pies baked in deeper pie plates more often than not have the filling spilling out of the pie crust.

HIC: Do you have any other tips on creating the perfect pie?

Rose: After rolling and filling the pie crust, cover it and refrigerate for a minimum of 30 minutes to prevent shrinking. Chilling it also helps ensure a flaky baked crust.

The best way to ensure that a pie has a crisp bottom crust is not only to bake it in this ceramic pie plate but also to preheat an oven stone for a minimum of 45 minutes and set the pie plate directly on the oven stone. Alternatively, most ovens allow you to bake right on the floor of the oven. After the first 20 minutes, raise the pie to a higher shelf to complete the baking.

Of course a pie crust should be delicious to eat and also tender and flaky but strong enough to hold together well to transfer to the pie plate and to make lattice strips.

My favorite pie crust recipe fills this criteria. To ensure that it is at its best, weigh the ingredients and add as little extra flour as possible. But if working in a hot kitchen and the dough softens, refrigerate it until firm.

If you’re baking a pie today, or any day, be sure to have all the best tools. Head on over to HaroldImport.com to view all of Rose’s baking tools, as well as HIC’s collection of baking tools and accessories from Mrs. Anderson’s Baking.